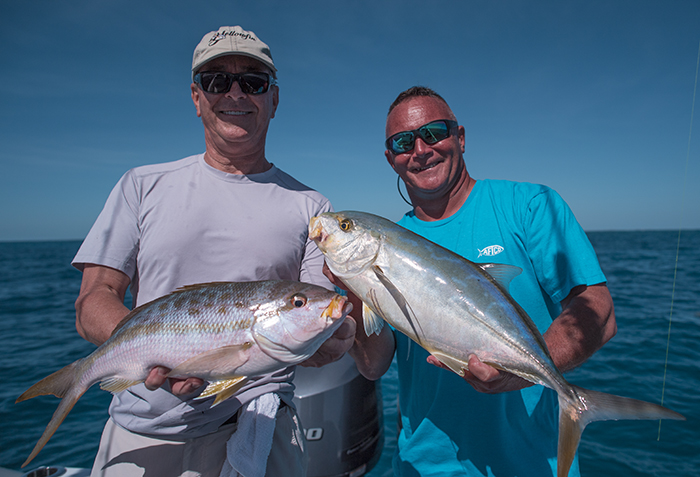 Capt. Rob Harris and his angler Kirk hold up some nice reef fish caught this week. 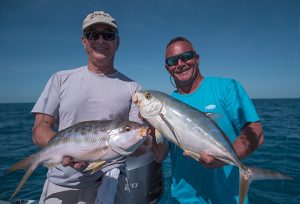 Capt. Rob Harris of the Gotta Go II and his angler Kirk hold up some nice reef fish caught this week.

December 3rd 2016 – Come to the Florida Keys for fishing during December. Yes, its that simple. In the tropics we are enjoying some of the best weather in the nation with a balmy 77 degrees and winds out of the North East and East day to day. The occasional “cold” front chills us to the low 70s and makes for an even nicer day on the water. It looks to us like we are going to have a warm Christmas week here in Key West and judging by the number of folks booking ahead, we are gonna be busy.

Deep Sea fishing has really rifled up with some great catches of dolphin, tuna and small sailfish out of Key West just past the reefs. The deep sea fleet in Key West has been getting out daily and showing folks a really nice mixed bag of fishing making it very much worth their while. The dolphin they are catching are quite large by the way. Check out our deep sea fishing charters in Key West..

Reef fishing all up and down the Florida Keys has been awesome. The bait numbers are not as great which makes the fish even hungrier. Grouper season is going to close in the South Atlantic on January 1 so get out there and catch yourself a nice red or black grouper, they seem to be everywhere every time I get out there. The snapper bite is producing some epic catches of yellowtails and mutton snappers. Remember if you want a snapper for lunch and not spend a gazillion dollars on a fishing charter. Look into our backcountry fishing charters where we can get you out to some good snapper fishing for 450.00 for two persons.. Great deal for a lot of fun and tasty sammich..

Speaking of our backcountry fishing. Lets look at this Florida Keys wide. Its NUTS!~!.. without a doubt our most popular fishing charter in Key West and the Florida Keys we are catching a load of different species in the backcountry. Lots of fun. The typical winter characters are showing such as trout, ladyfish, snappers, barracudas, sharks, pompano and the hard pulling different species of jacks.

December can be a little windy but so far its been pretty nice. I don’t have a crystal ball but I suspect from what I see in the Jet Stream Santa will be sunning himself wearing shorts and a Dream Catcher Charters t-shirt fishing on one of our boats here in the Florida Keys right after he does his thing..