Shark Fishing In The Florida Keys Is All The Rage!

Funny, when diving season gets into full swing so do our shark fishing charters. Kinda 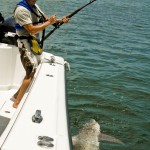 ironic isn’t it? Well shark fishing did not just get started here in the Florida Keys and Key West in fact people have been fishing for sharks here as long as there has been fishing in the Keys. The shark population of the Florida Keys has gotten impressive. With protection measures in place actually killing a shark is a rare thing. But boy to we catch em. Its not uncommon on one of our shark fishing charters we catch fish that get as large as 300 lbs. Thats about a 8 ft shark. On our shark fishing trips we catch all species that live here.

With that laundry list of species (and that is the short list) anyone can see why we have such a great shark fishing charter industry.  My favorite way to fish for sharks is in the shallows. Back int eh 90’s I started shark fishing out of Key West with my anglers that wanted something that was just big and pissed off they could fight with that was easier to hook up with than a finicky tarpon or other flats species. I called this trip “The Shallow Water Monsters Tour”. The Shallow water monsters trip consists of you, a guide, and some healthy fishing gear. Both light tackle and heavy conventional will be needed – Some even use a fly rod. The trip starts off catching bait. Anything will do, but I like to target small barracudas, bluefish, blue runners, lady fish and jacks. I chose these species for many reasons. First they are food of choice for the species of sharks I target with my anglers. Second they are a HOOT to fight on light tackle and fly. Third there are plenty of them around and Fourth They BLEED – They bleed allot a great feature to catch sharks. We spend a little while catching bait then off to the grounds where the sharks are. Always calm and tucked in among the islands we set up shop. Its like an ice creme store to the sharks with the treats I have for them. I start putting out the scent of their favorite foods and magically they start to appear. My anglers are always amazed at how many sharks there are in the backcountry. Don’t fall off the boat… That would be bad. You can see the sharks coming from 100 yards out to find out whats bleeding. Its really cool to see, I never get tired of it. Chose your weapon. Depending on the size of the sharks you can either fish them on light tackle spin with a plug or go with conventional and bait. Either way works well. If you are serious about fly fishing, we have tackle for that too. Ever hear of a guy catching a shark with a fly rod? It could be you. The sharks come for the bait, you set the hook and its all over but the drag burning. Hang on tight and these fish will pull you around the backcountry flats with lots of power. Its crazy cool fun. After the battle is over your guide properly releases the fish back to the wild no worse for wear just a little embarrassed that he fell for the oldest trick in the book.. We have shark fishing charters all up and down the Florida Keys and into Key West. These charters are private fishing charters and start at $425.00 for two persons. Up to four persons can go on these trips with our bay boats. Bring with you your camera, a hat, sunscreen and lose fitting sun clothing. Oh, and if Dead fish, blood, death, or teeth bothers you. Or, the movie JAWS kept you from taking a shower.. This may not be your fishing charter. For the Upper Keys including Islamorada Call 1-305-394-7299 and Speak to Anna.. For the Lower Keys and Key West.. Call 1-888-362-3474 Speak to Gennifer. Check out our Shark Fishing Web Site..