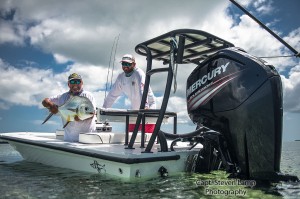 Fishing with Capt. Steven Lamp out of Key West. On board his Beavertail Elite custom flats fishing boat. Tommy and Brian pose with a nice Key West Permit

July 13th 2014 – The flats fishing is getting even better as the months wear on. All through the Florida Keys anglers are getting the shots at trophy fish in the shallows in the pursuit of the Grand Slam.

In the summer its not the water temps, its the crowds. With less boat traffic here in the Florida Keys our “off months” or weeks we have little pressure on the waters here turn out  to be the best time to be here for a shot at some world class flats fishing. I cannot tell you how nice it is to go out with my anglers and not see another boat all day long as we work the most productive flats in the Florida Keys.

The upper Florida Keys flats fishing anglers have been getting some great shots at tailing redfish on the flats back in the Everglades National park. Along with them there are some snook to along the edges of the mangroves with a great fishery for trout, but lets talk about bonefish. The Big Bones are not in the backcountry yet but some nice football sized bonefish have been caught near the Biscayne ocean side flats along with some nice permit too. The tarpon are still poking down the edges as the migration slows. Bridge fishing at night (I know, not exactly “flats” fishing) have been producing some nice steady tarpon bites for visiting anglers.

In Key West the flats fishing has been great as well. The permit fishing is right on schedule with nice fish being caught every day. A few days ago my angler and I caught three tailing permit in one flats fishing trip. Small bonefish are showing up on the flats in Key West as well in the right temps. Your best shot at bonefish this time of the year is with a Lower Florida Keys flats fishing guide that knows where they are. The tarpon migration has slowed to a trickle in Key West but the tarpon fishing continues. I am able to get my people on tarpon first thing in the morning for some nice shots at slow rolling fish. Read My Key West Tarpon Fishing Report.

This is the time of the year from now through October to visit the Florida Keys for great flats fishing. The hotel rates are low and the fishing is hot.
Call Us 1-305-292-7212 For more details.