Catching a grand slam while fishing the flats of the Florida Keys and Key West is the holy grail of fishing. Three sport fish, three difficult sport fish that are not easy to catch, all in one day of fishing. One time leaving the dock to get after them in one day of sunshine. All three species.

Throughout the Florida Keys the flats fishing grand slam consists of a Tarpon, Permit and a bonefish. All caught within pole-able depth of water and on the flats.  Flats fishing guides and anglers depart every day from the dock with dreams of all three. Tides willing and the fishing gods smiling it can be done especially this time of the year.

Many anglers and even some fishing guides think that tarpon season was over according to some bell that rang last week, when just before the new moon the tarpon stopped trekking down the beaches in their yearly migrational route.  That is simply not the case, and with the huge population of flats permit and bonefish.. We have just entered SLAM season. Where an angler can not only imagine catching all three of the fabled Grand Slam but actually do it with the right fishing guide that has done his homework. 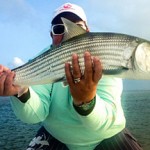 Down in Key West last week my anglers have enjoyed fishing for all three every day. The weather has been perfect and the tides favorable to work a grand slam opportunity well. On thursday My angler and I started off by jumping a couple or very nicer sized tarpon early using artificial lures (bogy original 7″ non weighted). The tarpon were very cooperative and ate well. We leadered one of the fish and played jump and dump for the rest getting the best part of the fight. Moving on out toward the Marquesas Keys We worked some top of the out going tide to kill some time and caught some very nice 30 – 40″ barracudas on artificial 12lb test. Once the tide was getting right I took my angler to a bonefish spot that was right on time for two very nice bonefish consecutivly over 5 lbs. We had 2 hours left in our day and went back toward Key West and worked some flats to finish of the slam with a permit. After 9 shots at some incredible fish we were just out of luck. the tide came to a halt and that was it.

Stories like the one above are not uncommon this time of the year. Right on through to the one of October I know I can consistently show my anglers a grand slam just about every day, conditions considered. I have always found, its not the first fish (usually the tarpon) not the second fish (most likely the bonefish) but the third fish of the grand slam that really rattles my anglers. Its that last shot, the last fish to reach martyrdom, to make it to the short list of anglers who have caught all three in one day that really rattles their cages. I love it.. And don’t you think I let them off easy to thinking this stuff is easy. I don’t and I love getting their tensions up. Its a HOOT..

Obviously Key West is on fire on the flats. With great tides this week its an Incredible time to get on the flats skiff and catch all three. Add a barracuda or mutton snapper to it and all the better. they are all here and ready to eat.

The Upper Keys report Capt. Matt Bellinger of Bamboo Charters says there has been a grab bag of opportunities with man species to chose from. Snook in the backcountry up to 16lbs. Black Drum are around and they fight really hard kind of like an ugly redfish on steroids. Permit are being found on the Atlantic side flats and just a hop away one of our good friends on Facebook Carmen was being guided by her husband Nelson when she boated a nice bonefish on spin gear just the other day showing the fact that bonefish are here and feeding. Cant go wrong with a fishing report like that. Sounds like lots of fun to be had.

This Is Your Time Of The Year. If you have ever wanted shots, without the wind at a tailing bonefish or permit, NOW Through OCTOBER is the TIME. Come get these species off your bucket list.

We think not.. This is our favorite time of the year to fish inshore. As a veteran flats fishing guide I have found that the late summer and fall only have one problem. Sometimes I can’t find anyone to go fishing with. Crowds are down, the fish are here, hotels are cheap cheap. The time to go fishing in the Florida Keys is NOW.