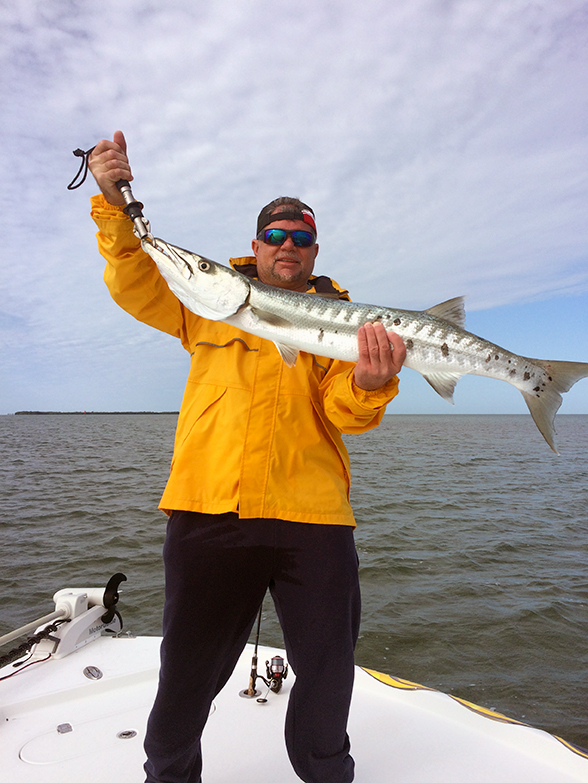 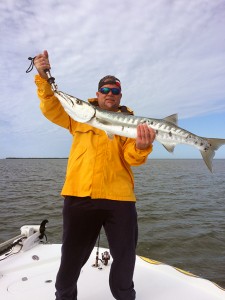 February 9th 2015 — Tis the season for the toothy critters. Wintertime is upon us here in the transcendent Florida Keys. And like every winter, big sharks and monster barracuda head to the flats. With the abundance of warmer water and a steady source of food, these two commonly under looked sport fish are going to be hanging out for a while. Now is the time to take advantage of this fishery while it is available! Everyone knows that wintertime usually means wind. And wind sometimes makes the fishing tougher than usual. Well not for us here at Dream Catcher Charters, especially us backcountry dwellers. The scattered array of mangrove islands and magnificent flats that occupy the inshore fishery of the lower keys make great wind barriers. While some look to battle it out in the big ocean blue, we can comfortably have an epic day of fishing in no more than four feet of water!

When I have clients on my boat backcountry fishing I creep down a pristine mangrove shoreline in pursuit of the Great Barracuda. A school of bait showers on the point of the island as the minnows flee from a stealthy predator. This is a tell tale sign that we are in the right place. The first cast is made and a massive barracuda starts to follow the bait! But the fisherman’s instinct takes over and he slows down his retrieve, as if to aid this twenty-pound hunter in catching its prey. Poof! The fish takes off in the opposite direction. Leaving nothing but a huge swirling boil in the water and shattered fantasies of a trophy to be. Again I remind the client that it is crucial to reel as fast as you can and to NEVER slow down your retrieve when a Barracuda starts to follow it. We try again and just a few casts later he is hooked up to a fifteen-pound barracuda in less that two feet of water. The battle is epic as we watch the fish sprint across the flat and head for deeper water. And sure enough, the angler plays the fish just right and we get him to the boat. The mission is a success.

It is well known that Barracuda have some of the sharpest teeth in the sea. Most fishermen assume that because of this they have to use wire leader or they will be cut off. This is not the case. This particular type of fish has a very distinct feeding habit. Due to its incredible speed the Great Barracuda attacks its prey from the back. Shearing off the tail of its prey. This immobilizes it and then allows the Barracuda to turn back around and eat the other half. Not only do they have razor sharp teeth, they also have incredible eyesight. It is not uncommon for a fish to swim right up to your bait and then turn away at the last second. Only to have you standing dumbfounded with your rod in your hand. But these two strengths are also a weakness.

PRO TIP: down size your leader and speed up your retrieve

I personally do not use more than a twenty-pound test monofilament leader when targeting these toothy critters on the flats. Fish for the bite! I would rather have a barracuda attack my lure and cut it off, than painfully watch them swim up to the bait and turn it down time and time again. YOU CANNOT REEL TOO FAST!! I promise you that this high-speed predator can swim faster than you can reel. Ripping your lure in as fast as you can also helps with the “impulse bite”. Which means the fish will just attack the bait on impulse instead of following it and seeing that it is made of plastic, not juicy fish flesh. My bait of choice is the MirroOdine XL. It’s flashy and also allows you to reel straight in as fast as you can. The lure does the work, no twitching needed for this particular style of fishing.

Try and target the edges of flats and mangrove islands with good flowing current. Aim for the edge of the flat that the water is pouring off of. The fish will stage up on the edges and the bait will be forced off the flat right to them. Many species will use this as an ambush point. And it will usually be more productive than the part of the flat where the water is entering. Make long casts to cover as much water as you can. It is not unusual for a barracuda to follow the bait for a couple yards before eating it.

These are just some simple tips to try next time you get out there. Remember to respect the environment that surrounds you. The Great Barracuda is not currently a regulated species and its population has exceedingly decreased over the years because of it. It is presently under speculation by the FWC (Florida Fish and Wildlife Commission) to impose harvesting regulations and help protect this important species. Barracuda is also known to contain a marine toxin called ciguatera. This is due to its known consumption of contaminated reef fish it does not hold any food value. So please try and practice catch and release if at all possible.

And now moving onto a species that you certainly do not want flopping around in your cooler. Sharks! These toothy creatures are truly incredible. They have been swimming around in the ocean for over 450 million years and will be swimming around long after we are gone. These fish deserve our respect for more reasons than their deadly reputation. I promise you that these fish are more scared of you than you are of them. With over 505 species across the globe all with different characteristics and traits, sharks truly are astonishing.

Shark fishing Florida Keys there are just a few that we will most likely run into on the flats. Lemon, Bull, Black tip, Nurse, Bonnethead, and Hammerhead will take up the majority of sightings. They all have a mind-blowing sense of smell and astonishing sensory receptors. Sharks truly are an apex predator.

They can be targeted a couple different ways here in our backcountry fishery. Only of the most popular ways (and my personal favorite) is to fish for them up and on the edges of flats.

I work with the guys at Dream Catcher Charters in Key West and shark fishing has become more and more popular. I enjoy taking folks out to fish for sharks just to get the expression of disbelief as they watch the bait get devoured.

To book me or any of the fishing guides I work with at Dream Catcher Charters just give Island Genn a call. She will hook you up for a day of fishing in Key West or any of the Florida Keys..
1-305-292-7212