Thanks Capt. Randy and Rick for this image.

September 3rd 2018 – As the tropical storm Gordon moves past us and into the Gulf I wanted to post a reflection of last weeks efforts sent to me by Rick Berry of Key Largo rods as he was bragging on his friends Randy Towe for the snook fishing last week out of the Upper Florida Keys. 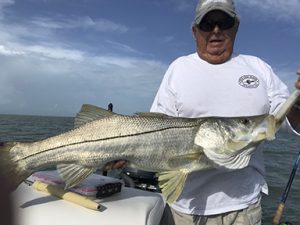 Last weekend on the opening day of snook season Florida Keys fishing guide Capt. Randy Towe and his friend Ralph Shepherd along with legendary Upper Keys Fishing guide Capt. Billy Knowles wanted just one snook to eat for dinner since the season had just opened. (See: FWC release on Snook Season) Unfortunately, all they could find were 4 over sized snook from 36″-38″  once in a lifetime Florida Keys Fishing catches for most mortal men but not edible for these guys. It seemed to mimic Towes’ efforts the week before snook season opened. During that trip Towe had 18 snook in the same sizes along with 7 cobia on the gulf side wrecks released numerous Jewfish, jacks and other fish. Towe described the water color as green with huge clunks of red algae which made fishing tough.

Snook fishing is hugely popular on the West coast of Florida as well as in the Upper Florida Keys such as Islamorada and Key Largo. Although there are snook in the Lower Florida Keys, when Key West fishing we don’t typically target them, however they make a great surprise as a by catch and Key West fishing guides such as myself, we always release them in hopes of a better future for a Key West snook fishery.
For the DIY Snook guys, I wish I could help. I am pretty certain these monsters were caught in some pretty secret spots. However, we can help you if you would like to get a charter and go after these fish in the Upper Florida Keys. Give us a call.