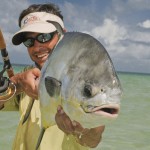 So much going on its hard to start. First reel cold front of the season came ripping through about yesterday. We dropped from a nice comfortable 82 down to a chilly 68 with lows in the lower 60’s. This does not sound like much to you Northern folks but its a big deal here. In A GOOD WAY…

On the flats in Key West we have been getting some shots at permit quite regularly. These fish seem to like the cooler waters and don’t seem to care. Fish in the 20 – 30 lb range  have been spotted here off of Key West and in the Marqueasas Keys. Bonefishing in Key West is all but done till next season when things warm up. Not to fret, we have the unsung hero of the flats the Great Barracuda ready to pounce on a well placed lure.

On the flats in the Northern Keys up near Islamorada and Key Largo there have been some great reports of Redfish in larger numbers along with some nice catches of Snook, on the flats the bonefish are nice sized and extremely weary. The guides up there really have their game on and showing folks a great time out there.

In the backcountry all up and down the Florida Keys the winter species are here and they are in solid. The boys here at Dream Catcher Charters have been working it real hard for their clients using ultra light tackle on our brand new Daiwa fishing reels to catch HUGE trout, Key West style. doing the Dream Catcher Drift  and having a ball with Jacks, Barracudas, huge lady fish, pompano and sharks. Fun times and bent rods.

If catching lots of fish out of Key West is your desire in the backcountry or on the flats give the folks at Dream Catcher Charters a Call. 1-305-292-7212

In the upper Florida Keys expect the same. Lots of rod bending on trout, redfish, snappers and barracudas. Don’t forget the spanish mackerels too. The upper keys are a great place to fish out of.