May 28th 2018 – Now that the rains are gone its time to get re-focused on the meat on the reef. By that, I mean the snappers.

This last week here in the Florida Keys has been exceptionally soggy. With the massive late season push of sail fish that came through just before Sub Tropical Storm Alberto made his early hurricane season appearance. We may have lost our minds – er I mean – focus on the meat on the reef in the for of tasty snappers. Yellowtail, muttons and mangrove to be more specific. We may have also forgot that its Grouper season right now. That started May 1 for the South Atlantic. 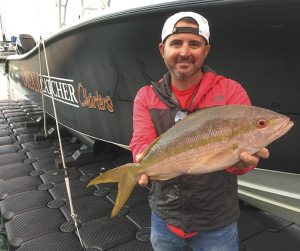 The snappers tend to do their spawning in April, May, June and July here in the Florida Keys and that makes for fat and relatively stupid fish that like to eat a lot. From what I have seen in my years of fishing Florida Keys that makes for a nice box of fish when I take my people reef fishing.

Last but not least the Grouper are always a nice filet to put in the box with your snappers. Thick, meaty and hard fighting you are allowed one of each species per person for grouper. We have red grouper, black grouper, gag grouper and scamp. Red grouper are most common and can get up to 20lbs pretty regularly. You can get out grouper fishing by going to the Reef or the Wrecks. 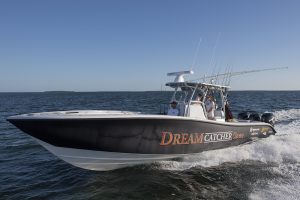 Our Yellowfin 36 Center console is an excellent example of a Key West Reef fishing boat.

While the Florida Keys deep sea fishing can be better out of the upper keys such as Islamorada and Marathon. The reef fishing is better out of Key West. Key West is the end of the road if you are driving though the Florida Keys, but, not the end of the reef. Our reef extends out an additional 80 more miles to the West offering up some of the best grouper and snapper fishing in the State of Florida. We run out toward the Marquesas Islands to for snappers and grouper and sometimes as far as the Dry Tortugas. A really great opportunity to catch great tasting fish and show folks a great time here at Dream Catcher Charters out of Key West.

Give us a Call and We will help you sort out what kind of Florida Keys fishing charter you may want. Or just answer your questions.